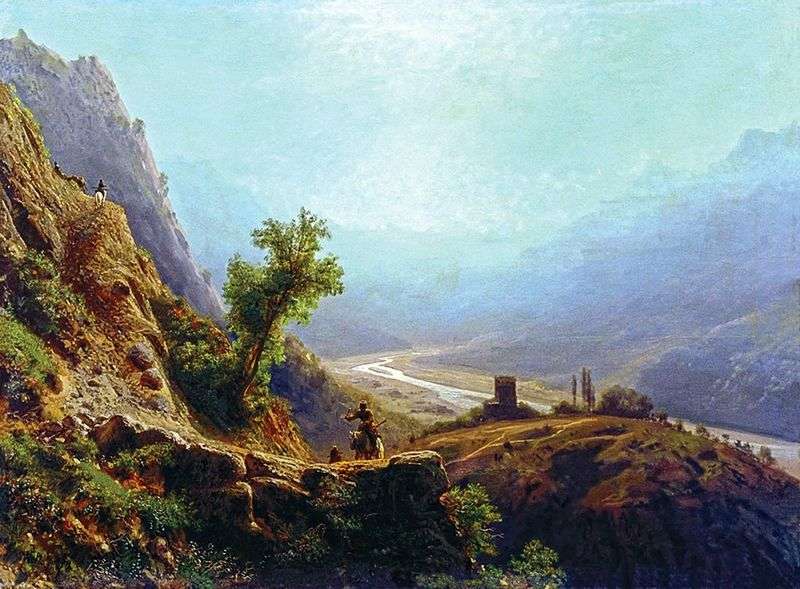 In his life, Lagorio devoted more than half of his paintings to the sea. Once marveling at the genius of Aivazovsky, once visiting the coast, he could not wrest from his soul a passion for the ocean. But there are other paintings in his work – cases from life, beautiful landscapes, where there is still something from the sea – even if it is something – the sky.

“In the mountains of the Caucasus” was written in 1879 – this is a picture-impression, a picture of history. Lagorio at that time traveled through the Caucasus, the Balkans and the Crimea, and, like any artist, took a piece of what he saw with him – first deep down, in imagination and memory, then in paintings.

“In the mountains of the Caucasus” is very realistic and written down to the smallest detail. No careless large strokes, no whole, developing from particles. It is detailed, neat, very attentive to the little things. And, of course, the whole landscape is full of delight in front of the mountains, because they are almost the sea, just the opposite. Here winds the river, reflects the sky. Here they climb trees and bushes along the slopes. Here is the sky itself – huge, smoky, summer, in which other mountain ranges are vaguely guessed. And the people – because without them nowhere, they are present everywhere, they walk both in the mountains and the seas – the riders on hot horses rise higher and higher. The one that is closest, the horse is hot, hurries it.

Perhaps he wants to catch up with the rider on a white horse – a friend from whom he has lagged behind, or an enemy he is chasing after – perhaps he is just in a hurry because he is waiting because the house is ahead because he wants to get there sooner.

The greatness of the mountains looks from this picture, the contrast of their lifeless vastness with the petty fussiness of the people. If you look at the picture for a long time, you can fall into the mountains, like in the sea, drown in them.

The love of nature, its unknowability and purity, looks at the viewer. Huge, all-consuming love, through the brush spilled on the canvas.