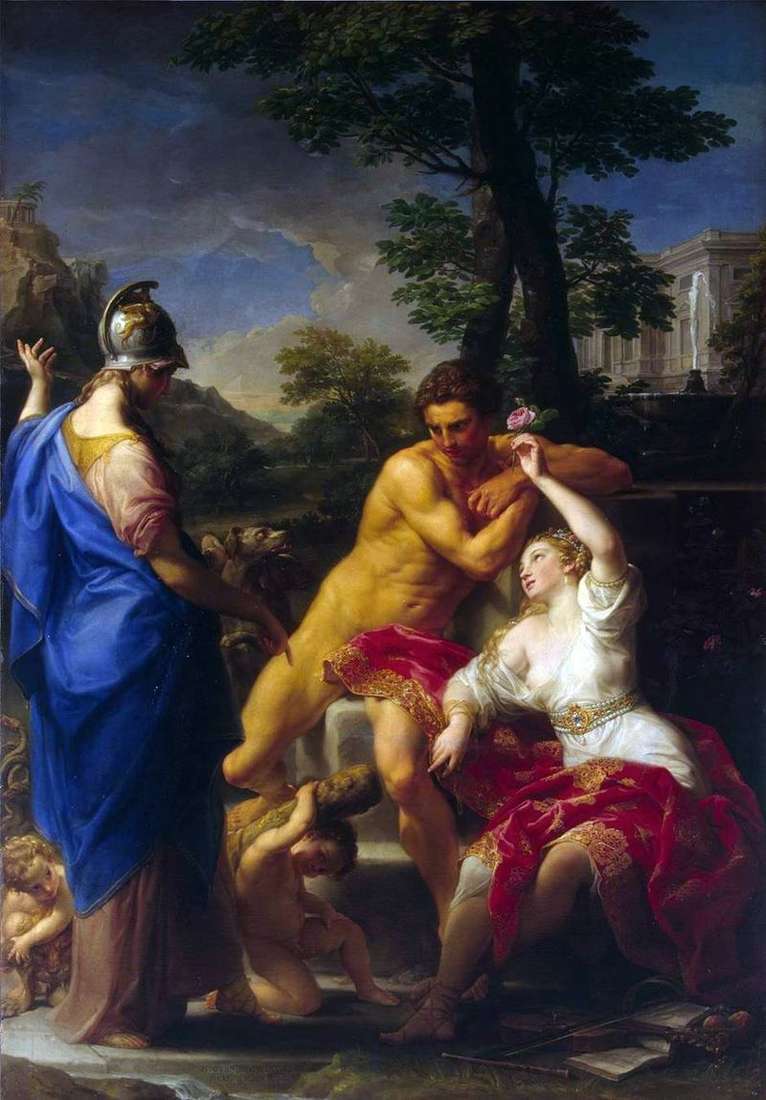 Painting of the Italian artist Pompeo Batoni “Hercules at the Crossroads between Virtue and Viciousness”. The size of the picture is 245 x 172 cm, canvas, oil. Hercules, the Latin form of the name of Hercules. In a figurative sense – a man of enormous physical strength. Many works by the painter Pompeo Batoni, the leading master of the Roman school of neoclassicism, are connected with the subject of civil and moral duty.

The painting “Hercules at the Crossroads between Virtue and the Vicious One” is one of the best works of such an allegorical theme. This allegory was created in the V century BC philosopher Prodik. When the young Hercules pastured the herd of his earthly father, King Amphion in Kieferon pastures, two women appeared to him, personifying Virtue and Vice.

In the picture of the artist Pompeo Batoni, women are represented in the images of Aphrodite, the goddess of love and sensual pleasures, and Athena, the goddess of wisdom and military valor. Aphrodite seduced him with the joys of life, Athena called for feats of arms. Hercules, after much thought, he heeded the voice of reason and devoted his life to serving humanity. On the future exploits of Hercules reminiscent of putti at the feet of Athena. Putti keep the hero’s club and the lion’s skin. Immediately, the three-headed guardian of the underground kingdom of Aida is depicted the dog Cerberus and the seven-headed hydra. Strict Athena points to a temple on top of a rock – an allegory of a difficult road to the recognition of valor and glory. The smart Aphrodite hands Hercules a rose. At her feet are the attributes of vanity and sensual pleasures: musical instruments, notes, fruits.

Virtue is a philosophical term, meaning a positive moral property of a person’s character, determined by his will and actions; constant active direction of the will to fulfill the moral law. Vice, in religious ethics, moral evil, consisting in the violation of the action, word or thought of the will of God. The concept of “vice” stands out from the more ancient and extramoral concept of “filth.” Vice is the opposite of virtue, a character of medieval and Renaissance plays, an allegory of intemperance.