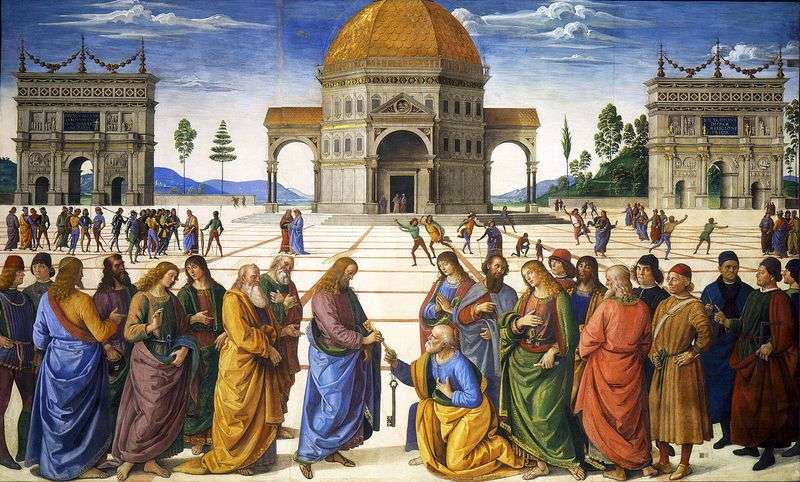 The features of Perugino’s style are already fully defined in the large fresco composition. The transfer of keys to the Apostle Peter, which stands out against the background of simultaneously executed compositions by Botticelli and Ghirlandaio, is a stately harmony of its structure, breadth of light filled with space, generality, calm balance, clarity of compositional rhythm, simplicity and solemnity. Only about two dozen witnesses who fill the foreground are present when Christ handed over the symbolic key to the apostle Peter.

As in the frescoes of Botticelli and Ghirlandaio, there are a lot of portrait images among them, not every one of these characters is very calm, their postures are natural, their gestures are smooth and unhurried. If Perugino’s contemporaries who worked in the Sistine Chapel preferred landscape backgrounds with abundant detail, then Perugino creates an ideal, orderly world dominated by harmony, intelligence, and perfection, embodied in a clear perspective building opening up to the first plan, laid out with large slabs of square and closing three perspectives magnificent architectural buildings – two huge, symmetrically located triumphal arches, as if embodying the greatness of history, and occupying a central place six rannom domed, church.

The latter is one of the most striking incarnations of the idea of the centric “ideal temple”, developed by the architectural theory of the XV century. Handing over the keys is the best work of the monumentalist Perugino. Unfortunately, three more compositions he performed in the Sistine Chapel – Christmas, Maria’s Education, Finding Moses – two of them were shot down from the wall to make room for the Last Judgment of Michelangelo, the third died when the front wall of the chapel partially collapsed.