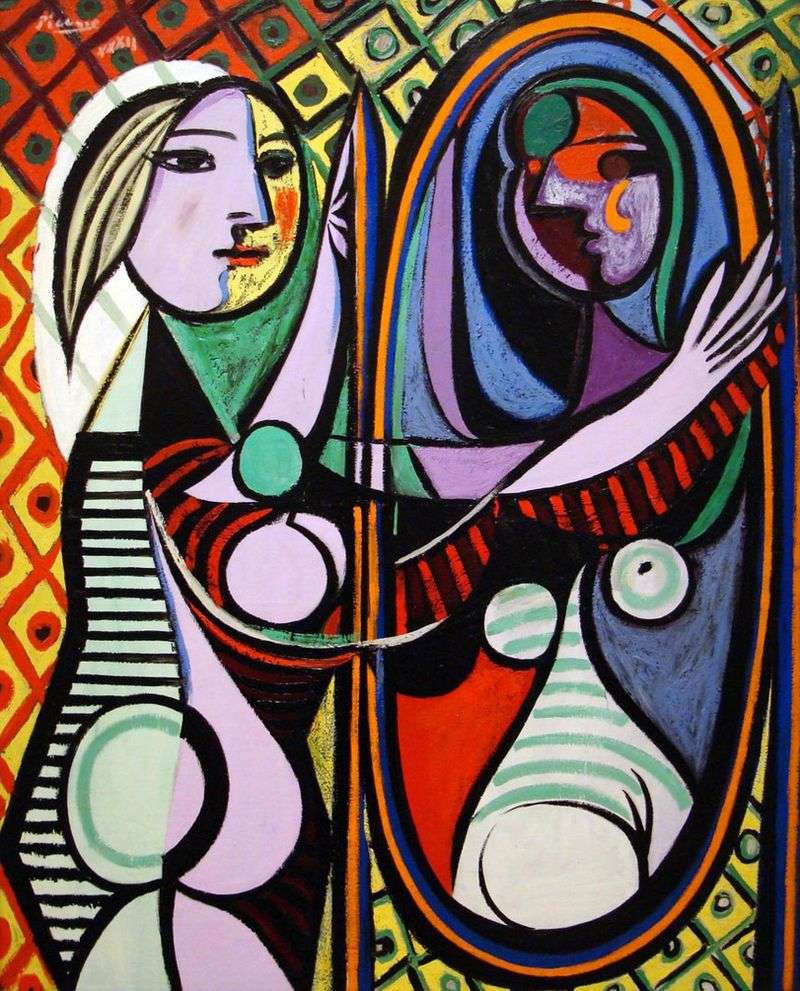 Picasso created the masterpiece in 1932.

He portrayed his mistress, whom he met in 1927. Her name – Marie Therese Walter. She became his muse. Walter shows a very unusual. This is no ordinary portrait. The artist tries to see the girl in the mirror. The main motive of this work – the exact image it is simply impossible to see in the mirror.

Picasso is interpreted differently. Each circuit in the mirror takes on a special mystique. Just strikes such intensity of each color. Amazing background with such bizarre patterns. The rounded arch in the foreground completely balanced diagonal lines that we see in the background. Diamonds

on the wallpaper are very similar to Picasso’s favorite costume characters – Harlequin.

The artist considered himself like him. That he specifically said that he is present in the picture, watching everything going on.

The face is divided into completely different halves. One resembles a real mask of wood, and the other – half moon. Pale pink and blonde hair profile talking about young heroine. A person is incredibly similar to the familiar crescent us.

Maria Teresa holds a mirror to hand, as if he wants to touch this unreal reflection. It beckons and frightens. The whole essence of the mirror becomes another. It reveals what is hidden inside. The usual gaze is not available. Bright spots surrounded by the reflection. The body seems to be deliberately distorted in the mirror.

Opposing passion struggle, and the viewer can see it. Maria Teresa was able to see his essence. The spot on the forehead of the heroine – is a special treasure chest in which is hidden and the whole inner life of Maria Theresa.

Some researchers believe that Picasso refers to the duality of the soul, Walter. But it’s possible. That shy girl sees your negative traits that are surrounding prefer to ignore.