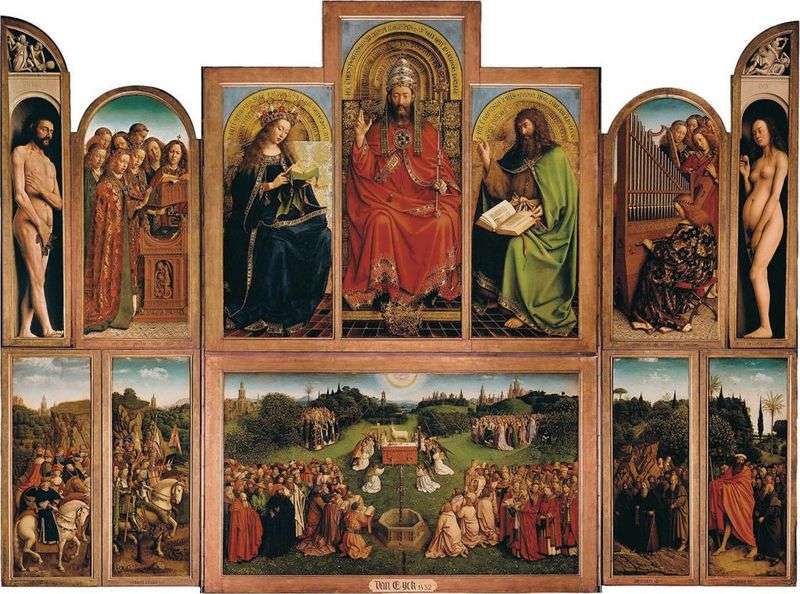 This is how the altar looks on holidays, when the doors are open.

In the picture of the upper row:

God the Father, reigning over all around. He solemnly sits on the throne, staring impassively ahead. Strictly symmetrical facial features are ideally perfect. The head is surrounded by a radiance on a gold background, and the tiara sparkles with a cold glow. Precious stones are strewn with a large buckle on the chest of God the Father and a crown at the foot of the throne. The ruby-red color of the clothes is emphasized by the matte radiance of pearls, the green emeralds and blue sapphires. The right hand of God the Father is raised upward, in the left He holds a scepter of transparent crystal. Every detail of this more than half a meter picture is made with jeweler precision and so carefully that the audience seems to feel the softness of the fabrics, the cold of the metal and the fragility of the crystal. Just below God the Father, the Virgin Mary and St. John the Baptist, even lower – angels singing and angels playing music.

Two groups depicting angels, playing music and singing, the most famous parts of the altar piece. Although there was a scientific assumption that they were originally intended to be separate parts, they clearly fit into the iconographic canons.

“Singing angels” stand in front of a carved music stand with notes. The expression of their faces is different: some have frowns focused, others are serene, some look at notes, others look at the diffused look into space. Even 500 years ago, van Mander, the first historian of Dutch art, wrote with admiration that the viewer can easily guess by the movements of the angels which of them sings with a treble, viola, bass or tenor, but all the different voices merge in a single choir, and solemnly the majestic song.

Decorative clothes, with carefully written details, and their natural poses increase the power of this huge vision. Such a realistic rendering of an angel choir means that in the fifteenth century, in the Netherlands, where music played a significant role in the life of society at that time, there was a proximity between secular liturgical ideas about singing and music.

United with the trio of God the Father, surrounded by the Virgin Mary and St. John the Baptist, these wingless angels belong to the “heavenly region”, and not only sing praises to God, but also call the music of the spheres.

The most extreme valves depict the first people – Adam and Eve, above them the scene of quarrels between their children – Cain and Abel.

Dedicated to the scene “Worship lamb” And is the main. The lower five folds are dedicated to the glorification of the atoning sacrifice of Christ, symbolized by the white lamb standing on the altar. To him crowds of people gather, holy and righteous, men and women, like the whole of mankind.

Religious unity turns into cohesion and fraternity, the spiritual community of all nations on a wondrous peaceful land, fragrant with a great many flowering trees and herbs, shrouded in a clear blue sky, bathed in the light of a radiant sun. The sense of harmony of the universe and man is also expressed in an easily observable composition, especially in the radiant joyful ringing of colors. The world of jubilant beauty opens to the eyes of the viewer. In it every little bit is precious and necessary.

Using the transparency of oil paints, van Eyck achieves exceptional effects of the radiance of the image surface and the true accuracy of the reproduction of the form. Lederings increase the depth of color, its strength. The main color chord of the scenic altar system consists of flaming red, blue and green flowers, centered in the robes of God the Father, Mary and John. Thanks to realistic techniques, the Ghent Altar became a school not only for Dutch, but also European masters. It was studied and copied several times

There was a time when parts of this wonderful altar dispersed to different museums. The original Adam and Eve were replaced by copies on which the ancestors of mankind appeared in leather aprons, as the chaste ruler Joseph II ordered replacing the originals with decent copies.

Having conquered the Netherlands, Napoleon transported the Ghent altar to Paris, but in 1816 he was returned to his homeland. True, in this form, that to one of those who saw these valves they seemed completely spoiled.

The flaps of this truly priceless treasure then stood on the floor of one of the churches and were covered with dust, which during the crossings simply ingested them. However, the key man, who was leading the traveler through the church, was happy to return from the exile of this treasure. And wanting to demonstrate his dignity, he spat on one of the panels, then wiped the place with a handkerchief, not at all suspecting his barbarity. The history of the gate “Righteous judges” turned out to be dramatic. In 1934, it was stolen, and the thief sawed the board. Next, he placed part of the image in the railway storage chamber. Calling, he called the camera number to the authorities, wanting to show that he owns another part of the image. He demanded a ransom from the Belgian government, but the authorities did not accept his terms, and since then all traces of the “Righteous Judges” have been lost.