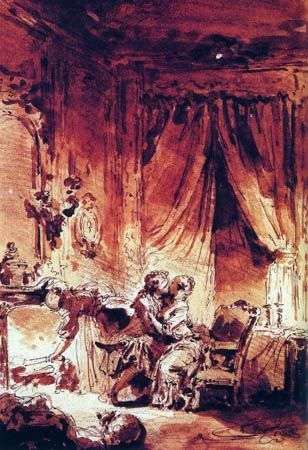 In the 1780s, Fragonard created three large series of drawings that were to become – but, unfortunately, never became – book illustrations. The first series of drawings Fragonard did for the book of the famous French writer of the 17th century Lafontaine. Among the illustrations was the picture “A forgiven servant”. There have already been several engravings of these drawings by Fragonard, but a revolution has begun, and the book with his illustrations has never been published. Two other series also did not hit the books. We do not even know the publishers who ordered them to Fragonar.

It should be noted that they are, perhaps, too complex for engravings to be made on them, so some researchers believe that Fragonard made these drawings for his own pleasure. One of the series consists of illustrations to the famous novel by Cervantes “Don Quixote”. On the trail. page one of the illustrations to “Don Quixote”: “The plight of Don Quixote and Sancho Pais, beaten slaves from the galleys.” Drawings of another series illustrate the poem “Frenzied Roland”, which belongs to the pen of the great Italian poet of the Renaissance Ludovico Ariosto.