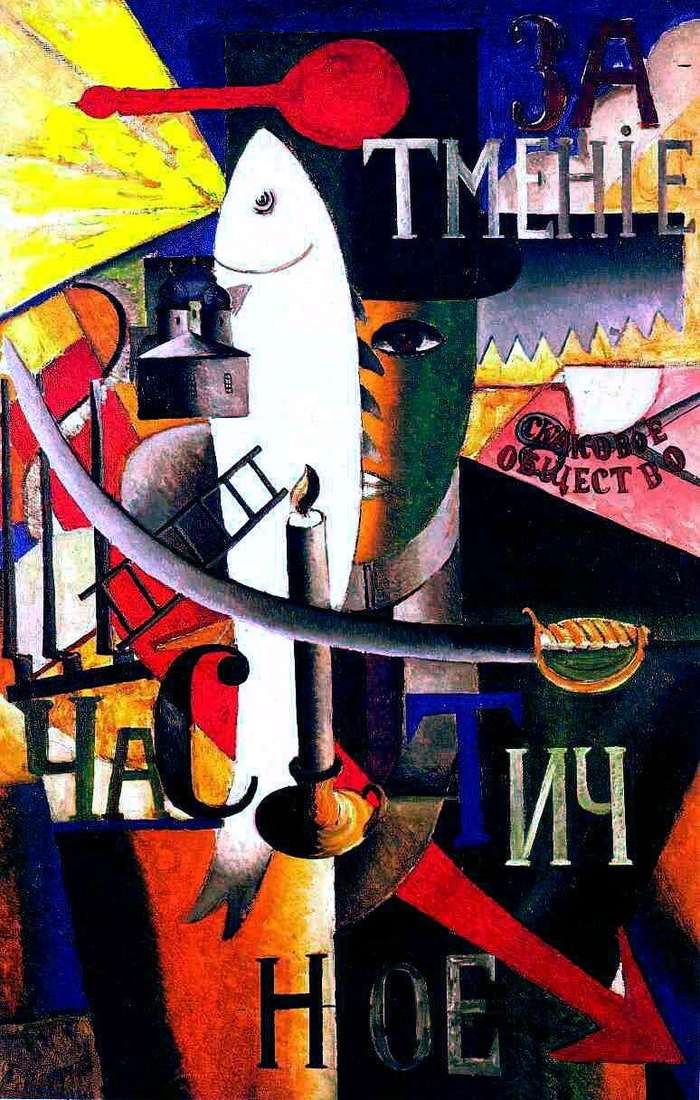 A certain gentleman looks at us and his eyes are blocked by a bunch of objects that immediately come across in the way of a foreign guest. But is it worth it to take this picture as a story about the tedious acquaintance of an Englishman with Russian culture?

The picture seems ironic, reminiscent of a collage or poster. Use of the text comes from the folk picture, popular print. But if the inscription there directly helped the understanding of the image, here we see a rebus.

Is it possible to attribute fish, temple, ladder, candle to Christian symbols? Perhaps this is the image of the old religious Russia. If a fish is just a salted herring, why does such a powerful beam of yellow light emanate from it, and is the temple nearby?

Race Society is a place where people try to make money by betting. It is behind the back of the Englishman, he came from there. The closest element of the barrier is the saber. It seems that it separates the viewer from the entire image.

The compositional movement is very interesting: it passes from the eye to the red spoon, which also fixes the character, then follows to the big arrow, which unequivocally sends the guest to the edge of the picture.

A partial eclipse most likely has in itself a link to a real astronomical event that was “heard” at that time. You can also draw a parallel with the darkening of people’s minds, a kind of confusion in society.

There is another picture with a similar inscription, where there are more abstract forms – “Composition with Gioconda.” This is a clear symbol of the transition from the old ideals to something new, unknown.