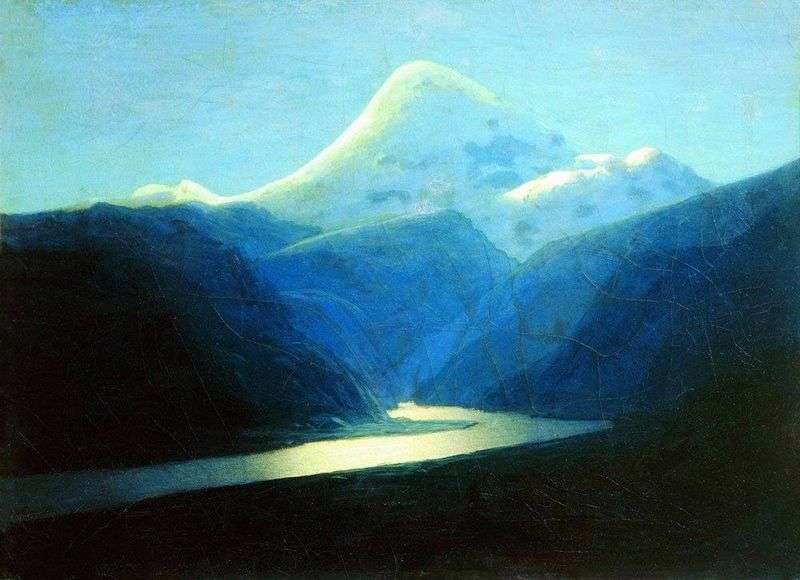 It is known that the Elbrus peak occupies a special place in the artist’s work. The work of Arkhip Kuindzhi directly demonstrates that the master studied the mountains for a long time. A whole series of works dedicated to Elbrus is famous, where the top is displayed on the canvas at different times of the day-at night, in the afternoon, in the evening, etc. But the matter is not only in a special relation to the picturesque mountain contours of the Caucasus, but also in following the traditions of the Impressionists who sought to depict the same object in the smallest transformations of air and light.

The presented work is one of the evening images of the famous peak. Snowy peaks on the canvas are like a link between still light calm sky and the earth, over which the twilight is already gathering and only the piercing arm of the river revives the landscape. Color coloring immediately allows you to identify the creator – a favorite blue, characteristic for many other works Kuindzhi, such as “Sunset Effect” or “Moonlight Night”.

The artist perfectly represented the air – free, snowy, palpable. Incredible technique of owning color and light created a picturesque narrow river, crossing the canvas almost diagonally, iridescent either from the moonlight, or from the reflection of snow-white peaks. If only one word had to be chosen to describe this work, then first of all, “greatness” comes to mind.

Great talent, filigree technique and innovation in color sensations allowed Kuindzhi to create a grandiose canvas, glorifying the grandeur and poetic beauty of the delightful Elbrus.