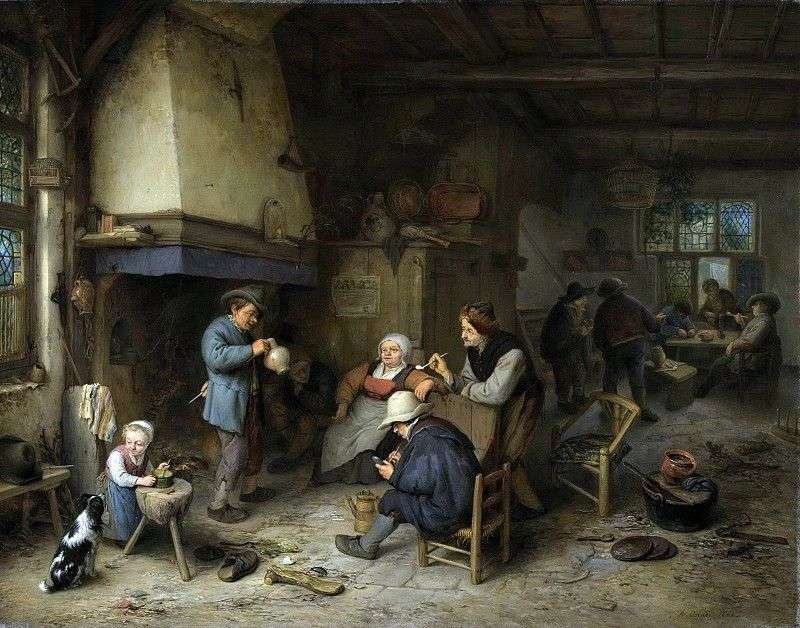 A popular picture of the life of Flanders. This zucchini, in one part of which at the table a group of men drink local wine or beer, smoke the cabin. And in another part of the vegetable marrow, in the foreground, another group: three men and a woman, the hostess of the establishment. Two men, telling stories, smoke a pipe, and one listens attentively to the conversation of men.

In the center of the group – the hero of the picture, himself “drunk”, he with a satisfied smile already drunk a lot of himself from a jug of wine. Among them, sitting on the same stool is the stout housewife of the tavern, she condescendingly listens to the drunken men.

In the left corner, the girl, probably the daughter of the hostess, eats porridge from a bowl, attached to a tripod stool. She turned her face to the dog, which clearly appeals to the girl’s conscience, so that she treats her. If in the back of the courgette is relatively clean, then in the kitchen around the reigns disorder: rubbish on the floor, here and there scattered dishes, a broken chair – it all says that the hostess is not too zealous and clean in her institution, she prefers jolly drunken tales guests. The picture does not cause a smile, rather, bitterness, that people so senselessly squander their lives.