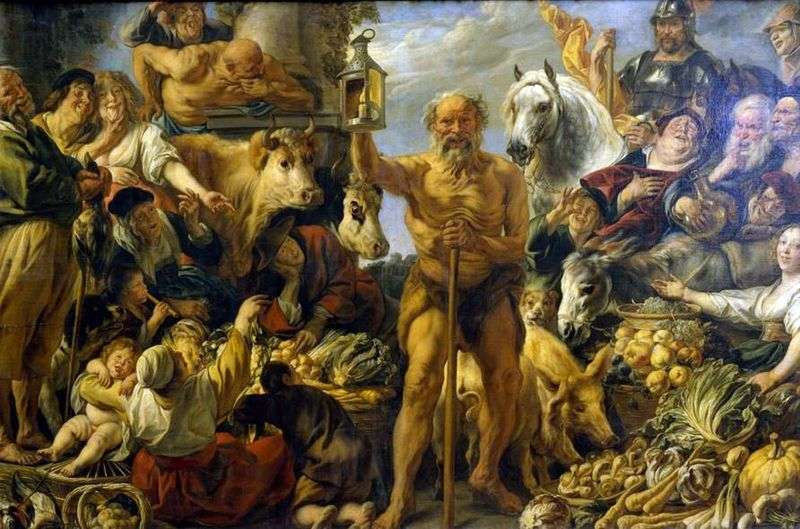 Painting by the artist Jacob Jordaens “Diogenes, seeking man.” The size of the picture is 120 x 174 cm, canvas, oil. In addition to the ceremonial portraits of Antwerp burghers and passage pictures on mythological themes, Jordaens also has more spiritualized images. Around 1642 the Flemish painter wrote a striking panoramic picture of Diogenes.

A large picture depicts an ancient market. In the foreground are trading rows with vegetables, domestic animals. Between the mountains, food is almost indistinguishable from the goods of the shiny faces of merchants, as well as ordinary people, warriors, drunkards, children. And in the center, amid this abundance is the emaciated figure of a stooped old man. He moves directly to the viewer from the depths of the picture, cutting the composition in two, like a ship dissecting waves. Mad sage Diogenes is looking for someone who is worthy of the name of Man.

Diogenes from Sinope, a philosopher-cynic, a disciple of Antisthenes, considered himself a follower of Socrates, but Socrates understood the doctrine unilaterally: he saw the goal of life in virtue, and virtue in asceticism. Believing that virtue consists in abstinence, in the absence of needs and in a life conformable with nature, Diogenes brought his asceticism to the extreme, very unesthetical in the eyes of ordinary inhabitants. Being completely consistent in his convictions, Diogenes denied along with the wealth and honors also the exact science, private property and marriage. Diogenes pupils are Stilpon Megarsky, Onesikrat, a companion of Alexander the Great, and other ancient Greek philosophers.