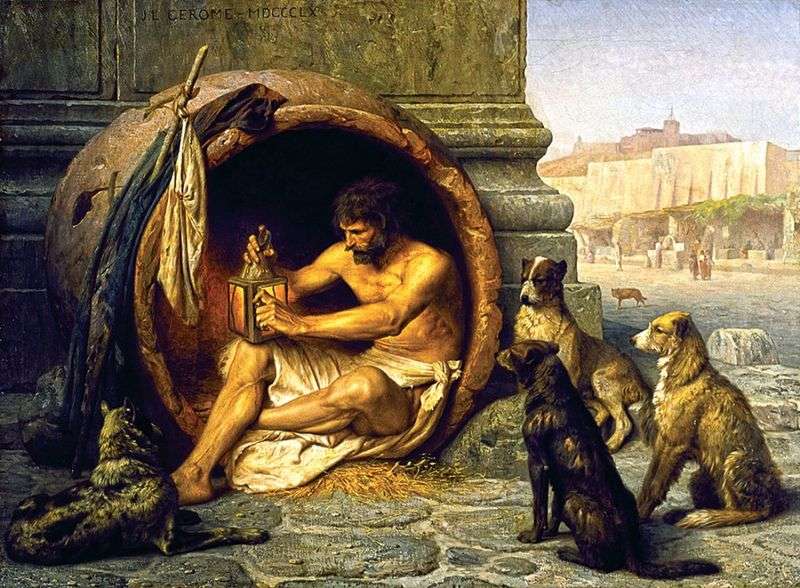 French artist Jerome Jean-Leon is not one of the world’s celebrities in the field of painting. His work is known only to connoisseurs of art history. One of the paintings firmly forgotten nowadays the master is dedicated to one of the cult figures of Greek antiquity – Diogenes of Sinope. With his name is associated with the emergence of the philosophy of cynicism. “Kinos” in Greek – a dog, a dog. The cynics called for reconsideration, for imitation of nature. They preached vagrancy, unshaven, did not study anything specially.

About Diogenes tell a lot of semi-anecdotal stories. According to one, he searched the day with fire and could not find a man. According to another, he asked Alexander the Great to withdraw and not to block the sun. Diogenes led a simple, lonely life in a barrel. He called himself a cosmopolitan, a citizen of the world.

How much does the picture correspond to the stories told? In many ways. A barrage of Diogenes is surrounded by a flock of dogs. It is known that to him the Greeks erected a monument in the form of a dog. In the hands of Diogenes, on which only a light cloak, the same lantern that did not help him find a worthy man among the host of people around him.

The author’s liberty, perhaps, is only that the barrel of Diogenes is clearly not somewhere in the bosom of nature and not on the beach, but at the butt of one of the Athenian temples.