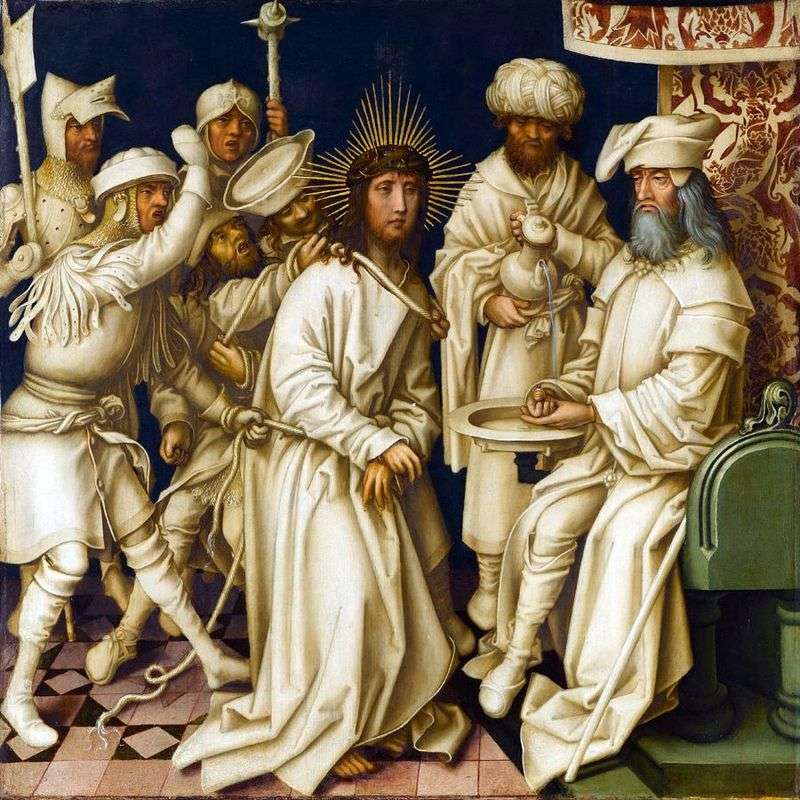 “The Passion of the Lord in gray tones” are considered one of the main creations of Hans Holbein the Elder. The cycle was named after the gray monochrome color scheme, made in the grisaille technique, imitating a sculpture. These are 12 paintings about the last episodes of Christ’s earthly life.

Christ stands barefoot in front of Pontius Pilate, with his hands tied crosswise – an allusion to the cross of the Crucifixion. Pontius Pilate, procurator of the Roman Empire in the province of Judea, is depicted seated in a judge’s armchair in a scene of washing his hands. A servant pours water on Pilate’s hands, a towel on the servant’s shoulder. At this moment, Christ is being led away by warriors. Washing hands symbolizes Pilate’s innocence in the shed blood of Jesus Christ.

This episode is told only by the Evangelist Matthew:

“And Jesus stood before the governor, and the governor asked him,” Are you the King of the Jews? “Jesus said to him:” You say, “and when the high priests and elders accused him, he answered nothing.” Then Pilate says to him, “Do not you hear how many testify against you?” he did not answer him a single word, so the ruler was very surprised.

On Easter, the ruler had the custom of letting the people one prisoner whom they wanted. There was then a well-known prisoner called Barabbas; So when they were gathered, Pilate said to them, “Whom do you want me to release to you: Barabbas or Jesus, who is called Christ?” For he knew that they had betrayed him out of envy.

Meanwhile, as he was sitting at the judge’s place, his wife sent him to say: do not do anything to the Righteous One, because today I suffered a lot for Him in a dream. But the chief priests and elders stirred up the people to forgive Barabbas and destroyed Jesus. Then the ruler asked them, “Which of the two do you want me to release to you?” They said: Barabbas. Pilate saith unto them, What then shall I do unto Jesus, which is called Christ? They all say to him: “Let him be crucified.” The governor said: What evil did He do? But they cried even more: let him be crucified.

Pilate, seeing that nothing helps, but confusion increases, took water and washed his hands before the people, and said: “I am innocent of the blood of this Righteous One; see you. And answering, all the people said: His blood is upon us, and upon our children. Then he released Barabbas to them, and Jesus, beating, betrayed them to be crucified. “