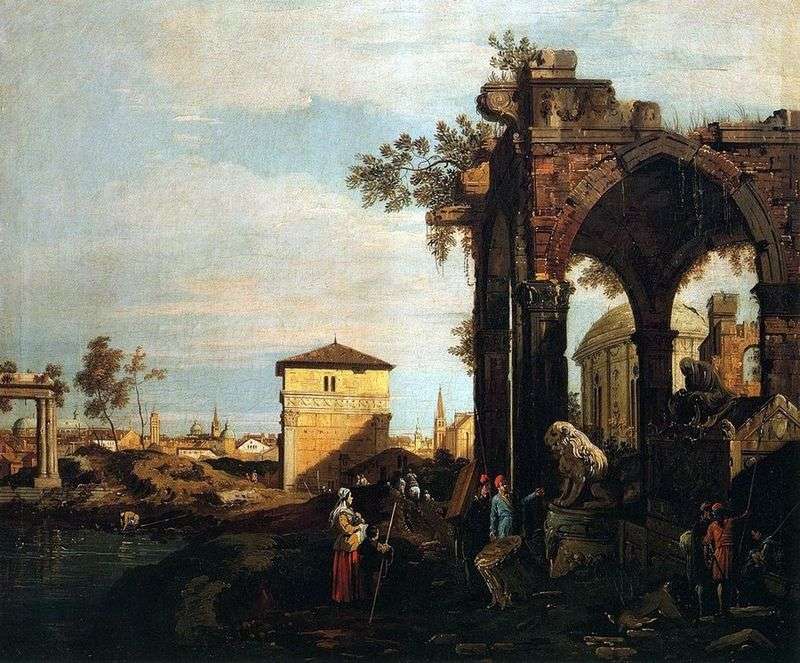 His Venetian career Antonio Canaletto started as a theatrical decorator, following the well-trodden father, also the theatrical artist, Bernardo Canal, the road. It is known that the painter used a “pinhole camera” – an optical device that made it possible to accurately capture various panoramic views.

However, it is obvious that the original theatrical practice developed in him a subtle sense of space arrangement, a remarkable ability to use perspective. Canaletto’s works produced a furore, and wealthy travelers who wanted to preserve the memory of Serenissima, get an “export version of the Venetian myth”, their countless orders made him a rich man. However, the neighboring cities in the region belonging to the Venetian Republic were also the subject of the artist’s attention.

From 1746 to 1756 the master lived and worked in England. The term “capriccio” has become popular in Italy since the end of the XVI century. Contrary to the already established naturalism of Karavadzhism, some artists advocated freedom of imagination. Thus, in the genre mentioned, the combination of a real and fictional motive, bizarre ruins, play of light and shadow, sometimes fantastic images became possible. Once the Portello Gate served as the entrance to the city of Padua.

Canaletto combines ancient and Gothic ruins, covering old buildings with bushes grown on them. So he illusory links together natural motives and artificial volumes of buildings. In his art appears a favorite image: an image of a majestic heavenly space with running clouds that are reflected in the flowing waters. Both landscapes, given and considered to be paired to him, “Capriccio with ancient ruins and structures,” were so popular that they were often copied.