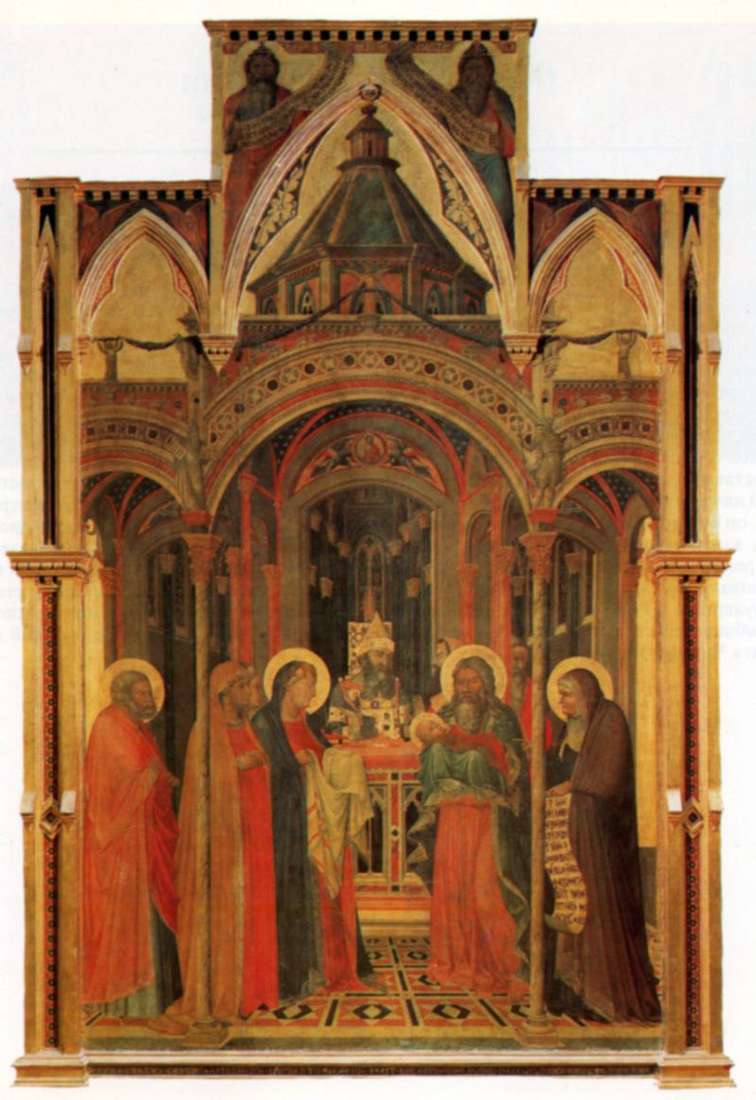 This large easel painting was the central image of the altar of St.. Crescentia Siena Cathedral. The triple lancet completion, resembling a triptych in shape, as if repeats the three naves of the Siena Cathedral, separated by rows of columns, above the center of which a polygonal dome rises. The solemnity and majesty of the basilica reinforce the colored marble divisions and decorations on the facade, as well as on the presbytery arch, on the altar or on the foreground mosaic floor, where the actors face the scene.

Unlike the previous developments of this scene, when circumcision was depicted, the sacrifice of Mary, the dedication of the baby or the grateful song of Mary, Ambrogio highlights the moved and prophesied elder Simeon with the baby in her arms.

The prophecy fills the mother of the infant, depicted on the left, with deep sorrow. Between them, pushed into the background, the high priest stands in ceremonial church vestments, in his right hand he holds a pair of pigeons, prescribed by the law of Moses, which Joseph brought, and in the left hand a sacrificial knife. The image of Moses is found twice in the picture: on the pediment and on the facade in the form of a small sculpture. Opposite to the latter, the same size sculpture of Joshua is depicted, resembling a Roman sculptural portrait, like the figure of Malachi on the pediment. This picture is a masterpiece of Ambrogio’s mature art.

The artist reveals the deep space of the three-nave temple in full face in a bold reduction, with a consistent, almost perfect application of the central perspective. Ambrogio depicts a spacious, airy interior space, the plausibility of which is reinforced by plastic, closed monoliths placed between the columns of figures. Expressive looks and stingy gestures, heavy falling folds of clothes and a geometrical composition built on fiery scarlet tones – all this creates dramatic tension of the scene.

The gothic interior of the temple is harmoniously combined with the facade antiquiting decor, winged geniuses and a garland of fruits supported by lions, and with the figure of Joshua, similar to the statue of the god Mars, as well as the gothic expressiveness of the characters of the picture combined with the classic forms of figures. Simultaneous display of architecture from inside and outside is a tribute to the artistic tradition of previous centuries.