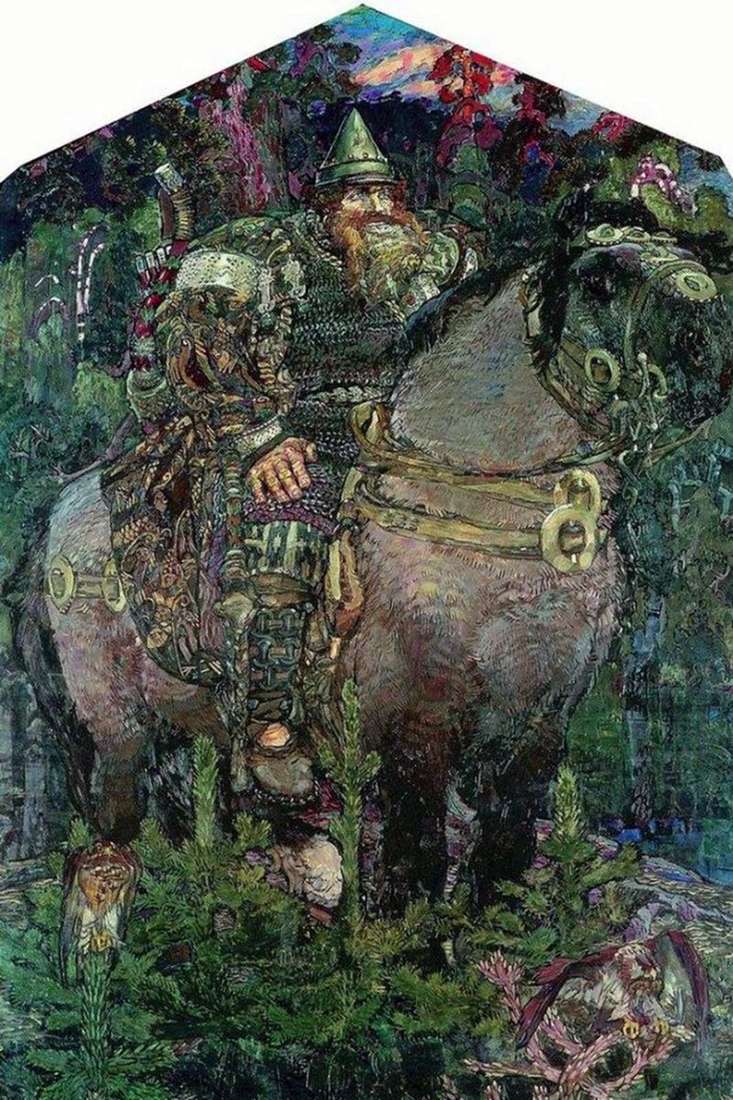 Originally, the painting was called “Ilya Muromets”, written by M. A. Vrubel incredibly fast, for a couple of weeks, with almost no preliminary sketches and sketches. In form, the picture was an ordinary traditional rectangle. Pointed from above in the form of a huge, heavy triangular spear shape, she received later. In general, the painting reflects the most monumental and bold designs of the artist.

To write his “hero” Vrubel began with the head of a horse, for which he was looking for the desired angle of the turn. The real Russian crowbars fit into his rider, or, under his weight, sank and hoofed into the ground, or she grows from the depths of mother earth, feeding on her forces, embodying her power. Somewhere far below, not reaching their knees, pine and spruce grow, a dark background, bizarrely curving, the enchanted forest is seen in the background.

A huge block, like a massive giant mountain, outlines the figure of the Russian warrior, making up a single whole with the horse’s body and further – with forests, fields, earth and sky. Traditional clothes for Russian heroes, recognized by us, look organically in a combination of colors, tones, lines of the general background of the picture. In the guise of a hero, the strength and power of the earth and people are organically concentrated, full of majestic calmness and wisdom.

The facial features are not written out for a specific hero of one of the epics, they have common, generalized outlines, they are symbolic rather than individual. The picture as a whole strikes a titanic fantasy, monstrous power and monumentality. Hyperbolicity is expressed in the very approach to the embodiment of the heroic principle, in the spirituality of nature and the people’s creative spirit. The author himself called his work the music of an integral man, which sounds like a hymn to his homeland.