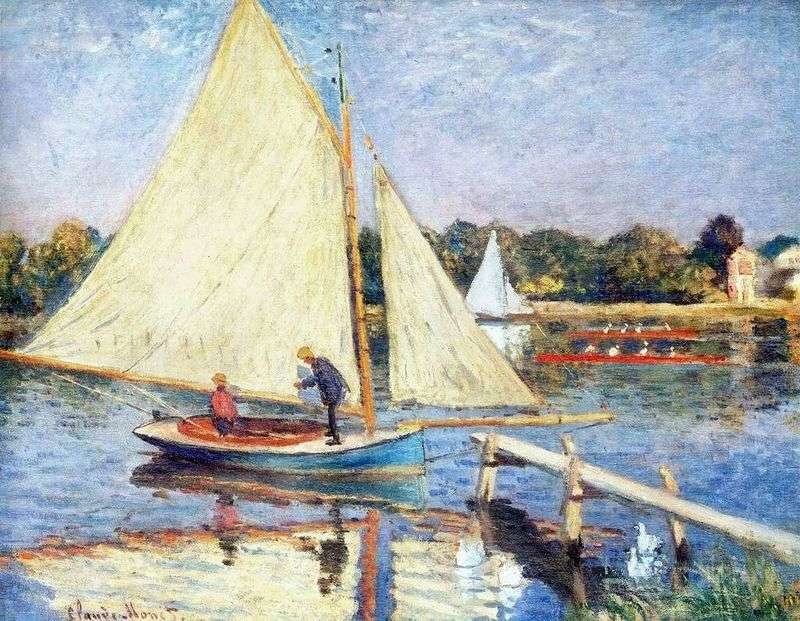 Impressionism was a popular trend among artists in painting in the late 19th and early 20th centuries. Creativity Claude Monet, who is the founder of the impressionistic direction, also enjoyed success. Monet liked to experiment with lighting conditions and worked a lot in the open air. In his paintings, he sought to convey his impression of the nature he had seen. In Arzhantey, where the artist lived for a long time, he painted numerous paintings and sketches written at different times of the day.

In the painting “Boats near Argenteuil” you can see the early morning when the sun has not yet come over the horizon. But it is precisely at this time that the working day of the fishermen begins. They equip their boats with fishing gear and set off from the coast for a great catch. In this early morning, a small breeze drives the stretched triangular sails, reflected on the surface of the water. Gulls swim near the shore, expecting a small fish to fall to them. In the distance you can see the red boats of the rowers, warming up before swimming.

The picture shows the moment when a large part of the population had not yet awakened from sleep, and only a few people quietly in the morning slowly prepare for a working day. Looking at the picture, it seems, you can hear the chatter of insects in the grass, the cries of seagulls waiting for easy prey, a surge of waves created by the movement of oars. The picture is filled with peace and harmony. In it, the state of nature awakening at sunrise is transmitted. The picture conveys a feeling of peace of mind and peace.