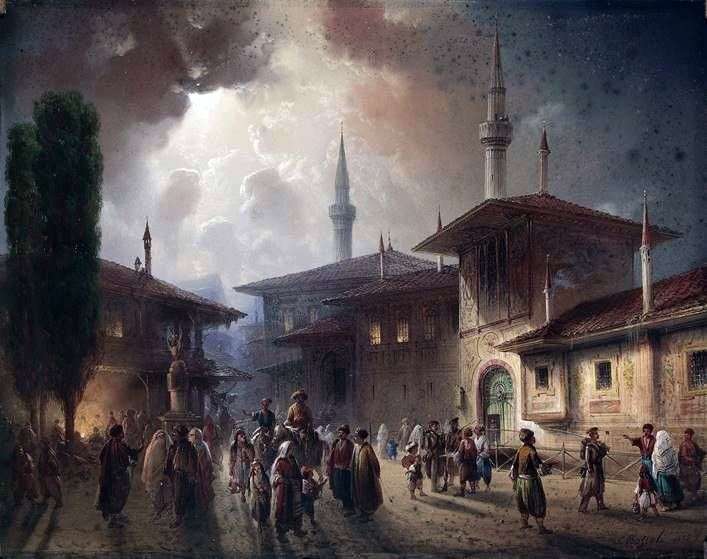 In the annotation to the lithography “Bakhchy-Saray” Carlo Bossoli notes that he depicted “the ancient Tatar capital of the Crimea” and “view from the large inner courtyard of the khan’s palace.”

On the right side of the picture there is a large mosque and khan’s graves, on the left – a khan’s palace. In the center you can see the entrance gate, and then – the city buildings, climbing the slopes along winding stepped streets. The artist wrote that the majority of the population are Tatars, and more than 12 thousand people live in the city.

tall tower on the left side was called Sokolinoy. From her, the wives of the khan watched the military competitions of the Guard and falconry. One of the main architectural attractions of the palace ensemble is the dyurbe Dilyary-bikech, the tomb of the beloved wife of the khan of Crimea-Giray, did not get a picture. This mausoleum is depicted in another work of the artist, not included in the album. The foreshortening of the drawing indicates that Bossoli performed the drawing, being in the depths of the courtyard, on the elevation of this structure.

“Garden Palace” Bakhchisaray, built to the south-west of Simferopol, in the valley of the tributary Kachi – the Churuk-Su River, is located in the forest-steppe area, on the foothills of the Inner Ridge of the Crimean Mountains. In the first half of the 16th century, by the time of the city’s formation, several settlements existed on the territory of modern Bakhchisaray, the main of which were Kirk-Er. Salachik, located in the gorge at its foot, and Eski-Yurt at the exit of the valley. Built in the beginning of the XVI century, the Khan’s palace was subsequently rebuilt several times and reconstructed.