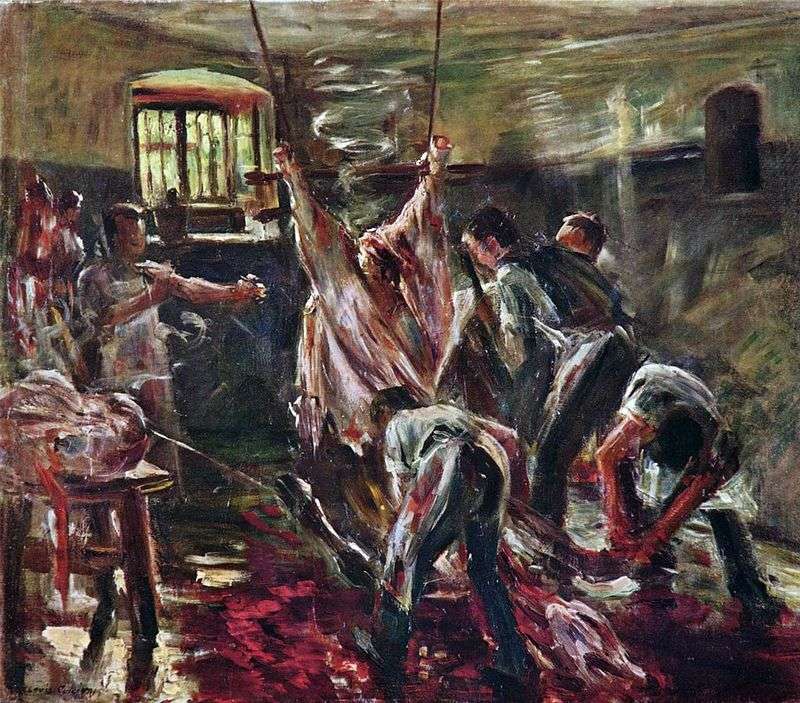 Realistic and naturalistic “In the slaughterhouse”, despite free technique in the spirit of impressionism, it shocked the public both at the end of the XIX century, and today. At the time of the massacre, “it simply caused an explosion – the public was getting sick from the naturalness of the work, in a real sense.” Critics were buzzing: someone applauded with delight – the artist left the “comfort zone” of contemporary art, someone frowned at disgust. The case had a huge resonance, and Corinth discussed everything.

The canvas, like a number of similar ones, united under the common name of “Scenes on the slaughterhouse” was a kind of protest to the artistic society that defeated the previous large-scale canvas “Diogenes”.

The idea of the painting belongs to a friend of Corinth – Otto Ekmann, who tried to pull the master out of a severe depression that even resulted in a suicide attempt. In fact, “tickle your nerves” really happened – the work clearly depicts the eerie situation of the carnage: a blood stain on the floor, a crucified animal on a hook, bizarrely curving in the work of the back of people.

Despite the truthfully depicted situation, the work captures a mood that “drags” your viewer from the first glance. In the beginning, you can see only broad expressive strokes that call you to peer at the plot, and here it complies with you, causing you to be horrified by the naturalness and eerie “picturesqueness.”

In the 30’s, the art of Corinth was recognized as a new power “degenerate, however, today time has put everything in its place.