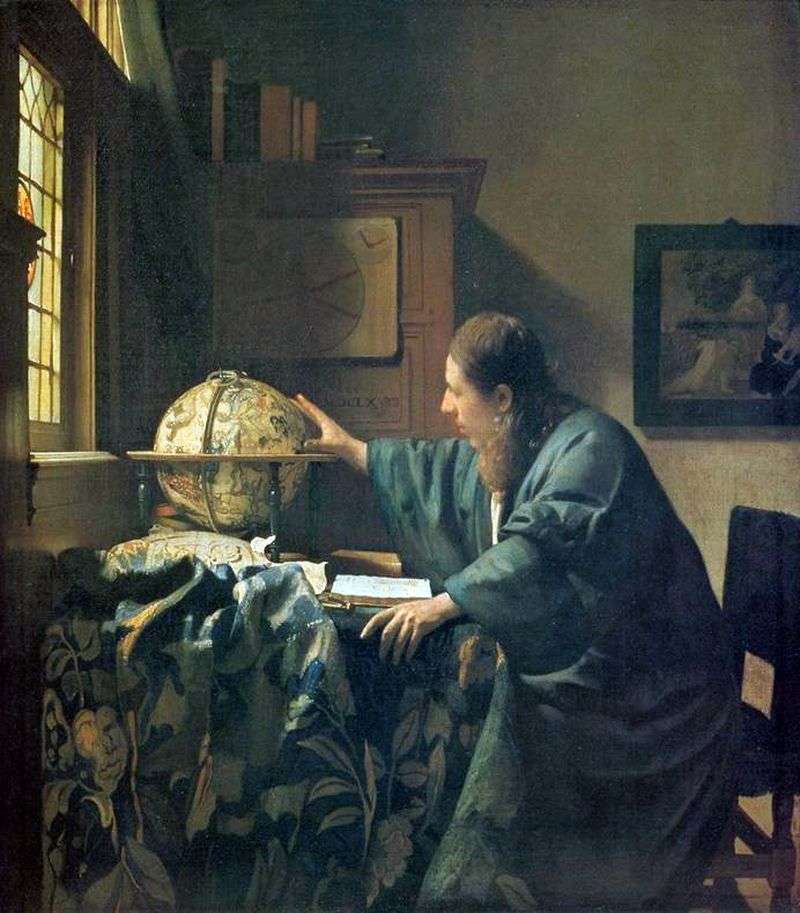 Painting of the Dutch painter Jan Vermeer Delft “Astronomer”. The size of the painting 50 x 45 cm , oil on canvas. In the years 1668-1669 an unknown man aged about thirty-five years, posed for two paintings by Vermeer, revealing the image of the scientist, worker of science.

At the same time, the future famous scientist and inventor of the microscope Antony van Leeuwenhoek, who was fond of grinding of glasses and the creation of lenses, was appointed surveyor of the city of Delft. It is possible that it Leeuwenhoek, a native of Delft and founder of scientific microscopy, could pose for these pictures by Vermeer as a scientist. Today these paintings are called “Astronomer” and “geography”, although they were not always those names. In 1713, at the auction it was sold as a “work showing mathematics, Van der Meer of artist” and “similar”. A few years later, they appeared at the auction called “astrologer” and “similar”.

There is no doubt that Vermeer painted a man who devoted himself to scientific research. “Astronomer” is presented without a telescope, but his hand touches the globe celestial sphere. In the closet is a dozen books, a table with three circles – one large and two small, perhaps a table for calculations, but the appointment is currently uncertain. Books, maps, astrolabes, compasses are essential attributes of a scientist in those years.

The paintings are of a certain spirit of stylization, with indispensable draperies, dramatic contrast of light, but Vermeer as accurately painted this picture, that the illustrations in the book that is in front of the astronomer, the researchers were able to identify it. This – the second edition in 1621 treatise “On the study and observation of the stars” Adrian Metiusa.

The book is open at page 111, which tells that for the study of the stars requires not only knowledge of geometry , the use of machine tools, but also “the inspiration of God.” In general, the picture is a compromise between the desires of the customer and the ideas of the artist. Some of the depicted objects Vermeer will likely have to borrow – a compass and a special angle for measuring the height of objects or the angle of the sun.