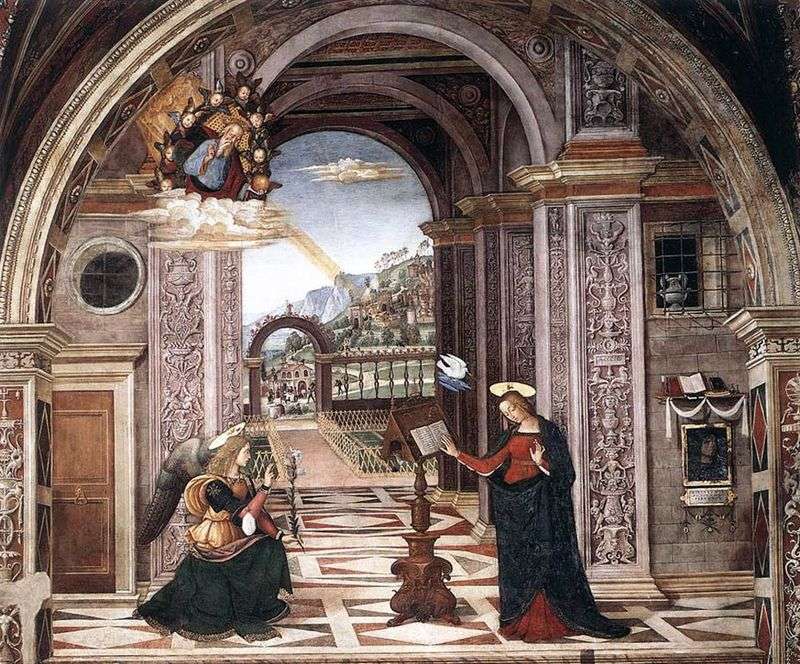 The Annunciation – the bringing of the “good news” to the Virgin Mary about the birth, the incarnation of the Savior from her by the Archangel Gabriel – this is the most important event, according to Christian doctrine, on the way of saving the human race. About the event of the Annunciation tells only one of the authors of the Gospel – the Evangelist Luke. This narrative, supplemented with apocryphal details, formed the basis of the pictorial images.

Luke the Evangelist narrates that the Archangel Gabriel was sent to the Virgin, engaged to her husband, Joseph, from the house of David; “the name of the Virgin: Mary.” Appearing to Mary, the archangel said to her: “Blessed are you among the wives,” “You have found favor with God; and you will conceive in your womb and bear a Son,” to whom you give the name Jesus. This son, as the angel continued, “will be great and be called the Son of the Most High,” and “His kingdom will have no end.” In response to the words of the angel, Mary asked: “How will this happen when I do not know my husband?” And the angel replied to her: “The Holy Spirit will find on You, and the power of the Most High will overshadow You; therefore, the Holy One who is born will be called the Son of God.” And then Mary said: “Behold, the Slave of the Lord; let it be unto me according to your word.” “And the angel departed from Her,” the evangelist ends his story.

Mary bent her head toward the Archangel Gabriel as a sign that she hears the message he brought and finds the grace brought to them. Complementing the gospel, “Proto-Evangelical” reports that Mary, who lived in Joseph’s house, was elected high priest among seven virgins to make the temple curtain: she was charged with spinning real purple and purple. It is for this sacred work, according to apocrypha, that the archangel sent to her finds it.

At first, only his voice, welcoming her, is heard by Maria, who has left the house with a jug to draw water from the well. And when, frightened and shaken, she returns to the house and, taking the purple, begins to spin it again, the heavenly messenger appears before her and says those words of the good news, which are told in the Gospel.