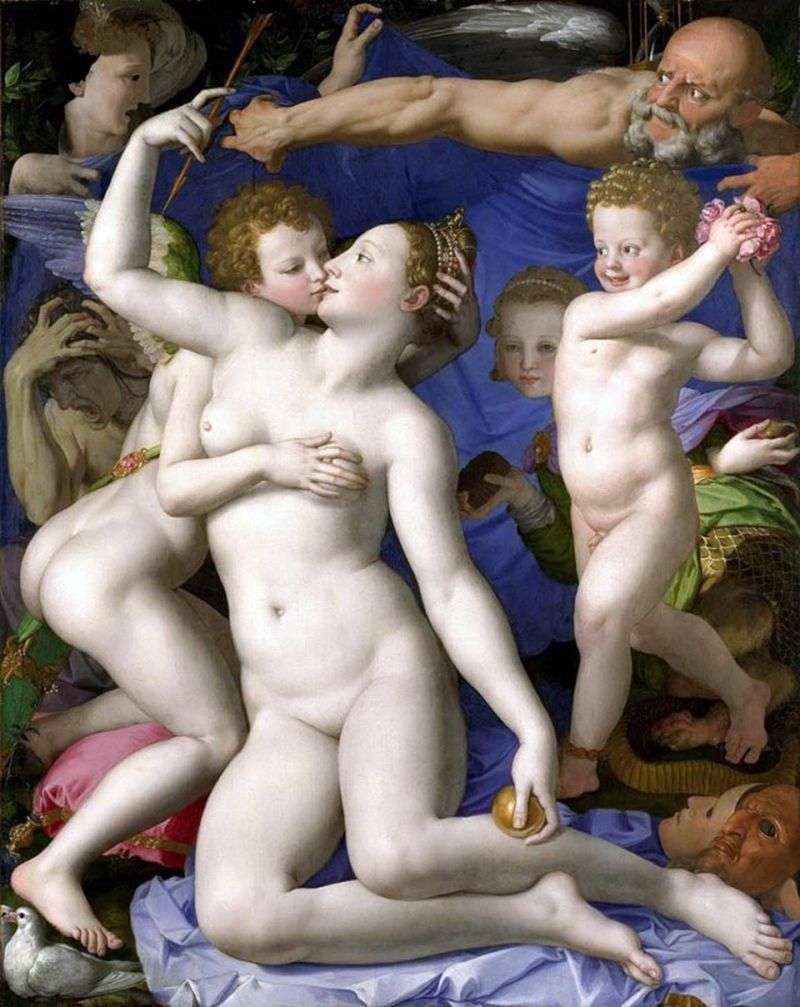 This allegory was ordered by the artist Duke Cosimo I of the Medici, who intended it as a gift to the French King Francis I. The symbolism of this sensual scene does not lend itself to unambiguous interpretation. Venus, kissing her son Cupid, holds an apple in one hand, and in the other – an arrow. This central image is usually explained as an allegory of Love, always accompanying Beauty. The figure with a painfully distorted face behind Cupid art historians have always treated as jealousy.

However, in recent years, researchers seem to have agreed that Bronzino may have invested in this image a more

generalized meaning. A boy with rosebuds in his hands, most likely, personifies Pleasure. A figure with a pretty girl’s face can symbolize Deception. The scene is written against the background of the blue veil, which is kept by Chronos and Oblivion. Notice that Chronos does not let the veil fall immediately, as if to say: “Everything has its own time.” Venus and Cupid are depicted against the background of a blue veil, written by the ultramarine, the most expensive at that time paint.

Ultramarine was obtained from lapis lazuli – a valuable mineral, delivered to Europe from Afghanistan. This pigment cost more than gold. So extravagant and uneconomical use of precious paint in this case is easily explained – Duke Cosimo de ‘Medici wanted to make a truly royal gift to another powerful lord. The blue blanket creates the illusion of a theatrical curtain, “closing” the viewer’s “backdrop” picture. The artist in this case is not interested in depth – it is much more important to bring Venus and Cupid closer to the viewer.

The composition of the canvas in many ways resembles the cardboard, which Bronzino created for the tapestry workshop Cosimo de ‘Medici. This gives researchers some reason to believe that this allegory could be performed as a kind of “sketch” to the now-lost tapestry.

Perfection of the shapes of the figure of Venus and Cupid is reminiscent of the ancient statues. This similarity is emphasized by the marbled smoothness of their tender pink skin. The gesture that the Cupid touches the head of Venus looks both stylized and full of natural grace. It seems that he is about to remove the crown from the head of his mother, and her golden hair will scatter on the shoulders of luxurious waves. Bronzino carefully wrote out every hair in the hairstyle of the goddess and every pearl in her crown.

The goddess of love Venus and her son Amour are perhaps the most frequent mythological characters in European painting. They appear in front of the viewer in a variety of guises, but symbolize, as a rule, one thing – sensual love, its pleasures and torments, flowers and thorns. Cupid – the fruit of the love of Venus and Mars – was considered by the Greeks to be the youngest of the Olympic gods. The Greeks represented him as a beautiful young man, calling him “golden-haired,” “golden-winged,” “like the wind.” Like Aphrodite, he was the culprit of passionate love and the master of human hearts. But one day, the very God of love could not resist the all-conquering feeling, having fallen in love with the earthly girl Psyche.

This poetic story was told to the world by Apuleius, who combined in her various myths about Cupid and Psyche. According to Apuleius, Psyche, the daughter of the king, was so beautiful that Venus herself envied her. The goddess sent her son to her, so he made the girl fall in love with the most terrible monster on earth. But Cupid, seeing her, could not carry out the plan of his mother. He himself fell in love with Psyche and brought her to his palace. Psyche was happy with her beloved. The only thing that did not bother her was that the Cupid forbade her to find out who he was, and always visited her under the cover of night. The girl’s curiosity grew stronger and stronger. The sisters of Psyche poured oil on the fire, visited her on a visit and envied the luxury that Cupid surrounded the lucky woman. To at least something to poison her joy, they noticed to her that, perhaps, her benefactor is not shown in the light of the day because of her ugliness. Psyche was hurt at the heart.

One night, when Cupid was sleeping in her arms, she, unable to endure the unknown, lighted an oil lamp, wanting to examine his face. It seemed so beautiful to her that she looked at him and forgot about everything. Cupid might not even know that the lover violated his prohibition. But the lamp fluttered in Psyche’s gentle hand, and a drop of hot oil fell on the shoulder of the god. Cupid woke up and left the deceiver in anger, leaving her to grieve for his reckless act. Venus was gloating. To bring the Cupid back, Psyche had to wander the whole earth, carrying out the subtle orders of the insidious Kiprida. The poor girl even descended into the dark halls of Hades – there she had to get the living water. Repentant in his anger, Cupid also asked Zeus to return his love to him. The long ordeal of separated lovers was completed, as befits,