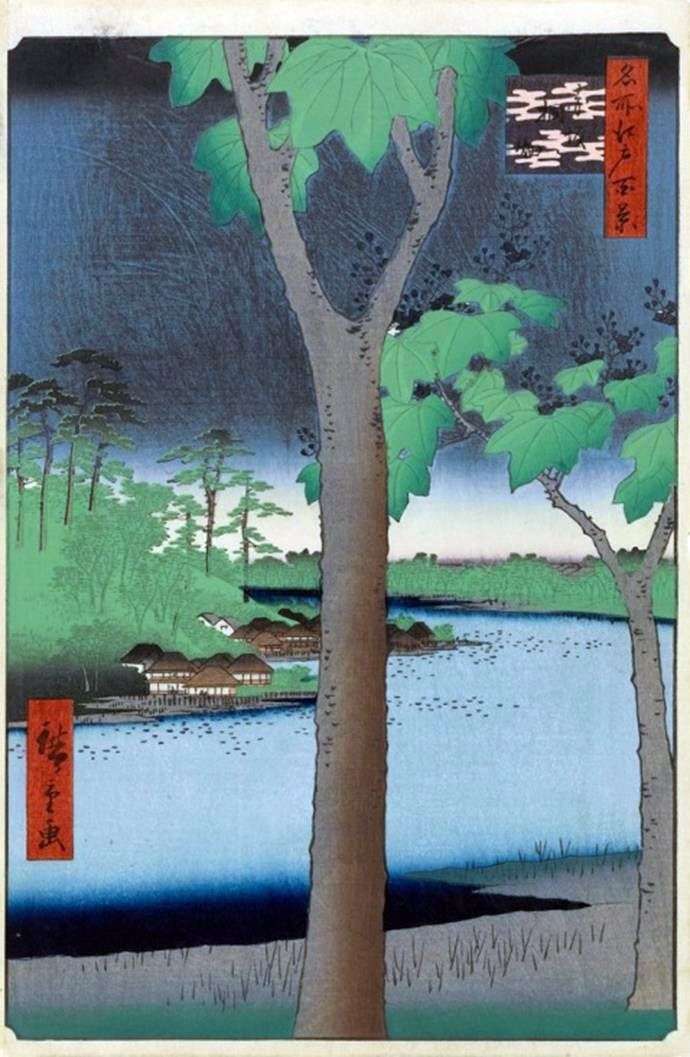 At the foot of the Sannodait hill, on the shore of a long pond similar to a pumpkin, is the temple of Hiyoshi Sanno Gonggen. Previously, it was a natural pond, but in the Edo period it played the role of an outer moat near Edodze Castle, and in 1606 it was expanded and a dam built. Subsequently, the pond was called Tamekike.

At the beginning of the XVIII century on the western shore of the Tamaeike pond were planted Pavlions – kiri, which gave the name of the entire area – Kiribatake – Pavlon Plantation. Before the completion of the construction of the Tamagawa Canal, this pond supplied drinking water to the southern part of the city of Edo. In the foreground, Hiroshige depicted two paulown trees. Behind them a view of the pond opens, on the left is the elevation of Sannodarita, at the foot of which the samurai houses. The second shogun Tokugawa – Hidetada ordered to launch into a pond carp from Lake Biwako and carp from the Edogawa River.

In the XVIII century in the pond were planted lotus seeds, which the viewer can see on the opposite shore. This pond was still known as the Sinobadzunoike pond. The time of day shown in the second version of the engraving is late evening. This is indicated by the color of the blue sky, the thickened shadows in the crowns of trees in the foreground and the general twilight tone of the composition.