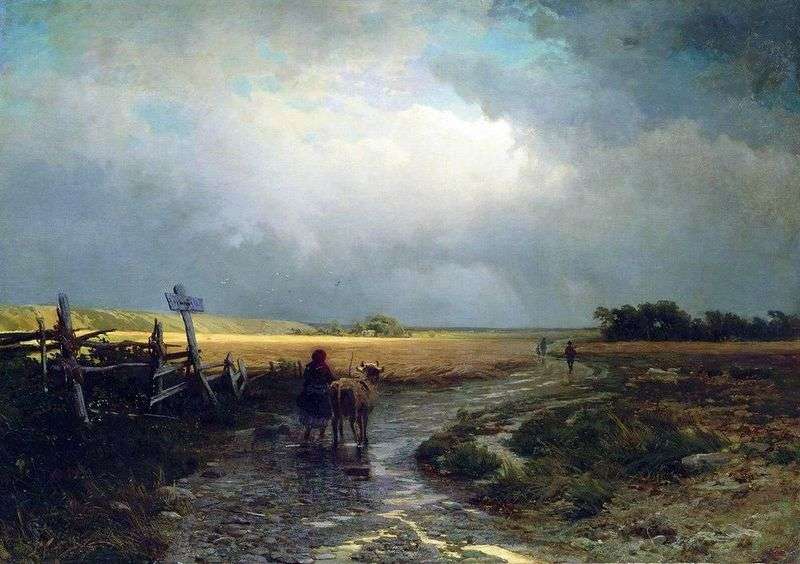 Vasiliev FA depicts a rural landscape in his painting “After the Rain.” In the foreground of the work we see a village, which leads its cow to the pasture. A woman wears a long skirt, and her head is tightly wrapped in a dark crimson handkerchief. Behind the woman on the road runs a small black dog. To the left of the woman there is a rickety index with the name of the village, which is supported by a shaky wooden fence. Here and there the old fence has already managed to grow grass.

The stone paved road is blurred by the rain that has just passed. Puddles and mud everywhere. The country road on both sides is surrounded by green meadows with slightly yellowed grass. Here and there are large gray boulders shining with rainwater. A winding road leads to the vast expanses of fields. To the left of the woman is a yellow, almost golden field, sown with rye. Towards a woman on the road are 3 people. Ahead from the right side is a green forest or a landing.

Judging by the considerable inclination of the trees, a strong cold wind blows. The horizon line is clearly visible. It, as if dividing the picture in half on the dark and bright side. The sky still remains hidden in black clouds and cumulus clouds. But already in its very middle one can see the blueness seen. From this blueness, the rays of the sun are slightly visible, as if signifying the victory of good over evil. Thanks to the sun’s rays, the rye field casts gold even more.

In general, the picture casts the impression of an impending disaster, as if there is still some kind of danger.