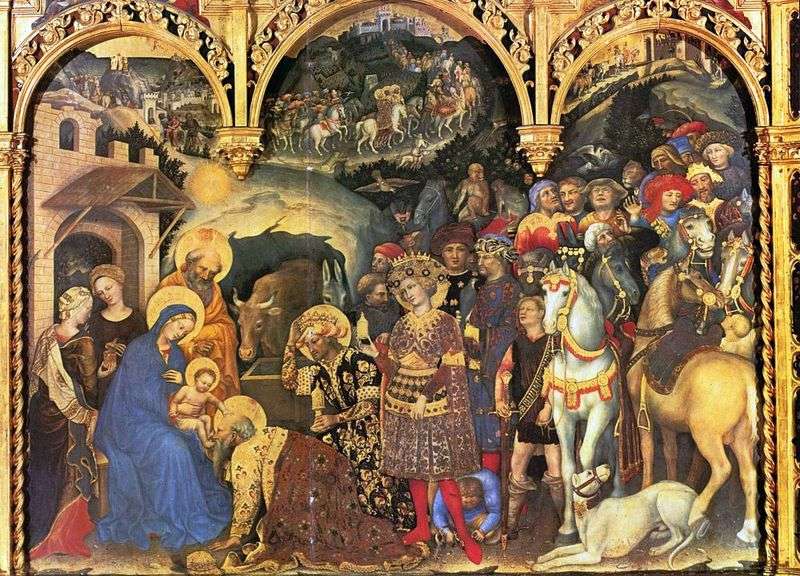 Painting Gentile da Fabriano represents such a flow in European art as international gothic. The altar “Adoration of the Magi” was created by the master for Strozzi Chapel of the Church of Santa Trinita in Florence. A crowded colorful procession is depicted moving in the direction of the foreground of the picture.

The gospel story of the kings who came to worship the Infant Christ is interpreted here in the spirit of a medieval knightly novel: one of the wise men binds a spur to the master, which emphasizes his master’s ownership of chivalry, the scenes of hunting are interspersed in the picture, and the manner of many characters can be defined by the word “courtly” – it’s enough to look, for example, at the servants on the left. This work is interesting to consider, because it is full of wonderful details, for example the Child Christ is stroking the head of the elderly magician kissing his leg. Among those who come from afar, there is only one – young and old, knights and hunters.

In the picture there are not only people, but also animals – a lion, a cheetah, monkeys, a falcon. It seems that the artist used the plot also for the sake of depicting the wealth of the world led to him. This altar image is written out with pure, shining colors, like jewels, and its decorativeness is enhanced by interspersed here and there with gold. The frame was made according to the drawing of the master himself, who included small images in it and thought out the decor to the smallest detail. The altar of the altar consists of three picturesque parts representing the “Nativity of Christ”, “Flight into Egypt” and “Bringing to the Temple.” The historian of art Viktor Lazarev wrote: “In his altar image, the most beautiful and festive picture of the early quattrocento, Gentile depicted the feudal world leaving the historical scene in all its splendor,